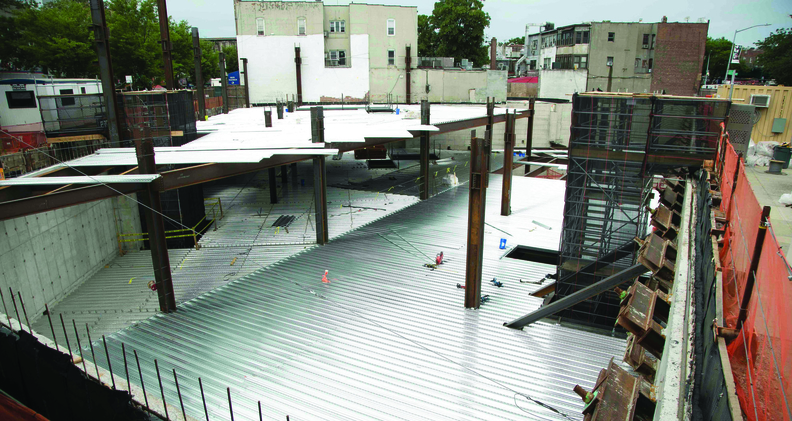 The development underway at 40-31 82nd St. in Queens, where politics killed a plan for affordable housing and continues to threaten the project.

Rep. Alexandria Ocasio-Cortez trashed his project, his local city councilman turned on him, and his state senator along with a neighborhood community group sued him.

Queens real estate developer Heskel Elias says he has a tale to tell about his attempt last year to construct an apartment building in Jackson Heights with affordable units and a Target store on its ground and basement levels.

While the project might seem innocuous in a city short on low-income apartments and retail outlets catering to price-conscious shoppers, it instead drew fierce opposition from a progressive wave that has focused its ire on corporate and real estate interests.

Elias, a longtime Queens resident, a developer for more than 30 years and a political donor known for his deep pockets, was forced to retreat from his plans for the development at 40-31 82nd St., a block from the 7 train.

As a result, he and his partner in the project, Sun Equity Partners, are proceeding with a revised plan that doesn’t require any zoning changes and will house offices and medical suites instead of the residential units, with the Target store anchoring the retail space.

That scaled-down version of the development continues to draw bitter opposition as well as a lawsuit from state Sen. Jessica Ramos and the community group Queens Neighborhoods United.

Despite spending more than $1 million on planning for the failed apartment building, including fees for lobbyists, architects and lawyers, what troubles Elias more than the lost time and money are the blows he says he has suffered to his reputation from elected officials eager to cast him as a villain at a moment when real estate interests have become a target of populist anger.

Elias gripes that his experience is an example of how that shift has stifled debate over the merits of real estate development and persuaded more moderate elected officials, fearing political backlash, to abandon projects like his.

“In politics, in order to shine, you need to find an enemy you can bash,” Elias said. “And I was the perfect person at the perfect moment.”

Elias said that just over a year ago, he counted Councilman Francisco Moya, a Queens Democrat and former state assemblyman, as a key supporter. The two attended a meeting in early 2018 to discuss the proposed apartment and retail building with the chairman of the local community board, which was opposed to the development.

“Moya was advocating for us,” Elias said. “We would have never gone ahead and spent $1 million on the planning of this project if he hadn’t given us encouragement.”

To raise the 13-story, 120-unit project that Elias envisioned, he needed to rezone the site to boost its allowable square footage. Mayor Bill de Blasio has encouraged developers to seek such modifications under the city’s Mandatory Inclusionary Housing program, which grants added bulk in exchange for guarantees that 25% to 30% of a project’s square footage be reserved for affordable units. MIH has been a core component in several of the de Blasio administration’s rezonings. Given its proximity to the 7 train, Elias’ building was also in line with the prevailing belief among city planners that added density should be granted to sites close to transit.

But the political winds soon began shifting for Moya. Ocasio-Cortez, then campaigning for the House of Representatives seat long held by Joseph Crowley—a political mentor and ally of Moya—expressed stinging criticism of Elias’ project at a community board meeting in March 2018, a precursor to the kind of anti-development rhetoric she used to help scuttle Amazon’s proposed Long Island City headquarters.

In November Ocasio-Cortez toppled Crowley, ushering in a progressive wave in city and state politics and dealing a major blow to the Democratic Party machine that had cultivated Moya’s political career.

“AOC created a totally different atmosphere,” Elias said. “Everyone went into their hole.”

To try to undercut the growing criticism, Elias pledged to offer even lower rents for about half of the project’s 42 affordable units to make them suitable for renters earning the area median income of around $47,000 a year.

By then the developer was midway through the city’s uniform land-use review procedure, a seven-month approval process that ultimately would give Moya power to green-light or block the project.

Elias said he also struck a deal, at Moya’s behest, to employ higher-paid union building workers, including doormen, porters and maintenance staff, at the property. But flak from vocal opponents, including Queens Neighborhoods United, continued to dog the project. The critics labeled it a symbol of gentrification in a working-class neighborhood with a large population of immigrants—despite the fact that economists and planners have largely discredited the notion that stifling development curtails rising rents.

“If a developer is coming into a community and is building housing that is not affordable to that community, they are bringing in a different wealth bracket,” said Carina Kaufman-Gutierrez, an organizer for Queens Neighborhoods United. “That is a harbinger of displacement.”

The opposition group, which was founded in 2013 to represent immigrant interests in neighborhoods such as Elmhurst, Jackson Heights and Corona, took issue with the fact the affordable apartments, no matter how low the rents, would be out of reach of most undocumented residents because the city’s affordable-housing program requires applicants to have a Social Security or Taxpayer ID number.

Caught in the middle

Elias said he received a phone call from Ramos, who was then running for state Senate, just after the 2018 Fourth of July holiday. Ramos told him she was rejecting a campaign donation of $14,000 that Elias had given her for her Senate run, and she would donate the contribution to a charity providing relief to detained migrants at the border. Her campaign later said that it had given the money to the Hispanic Federation.

“We had support from Jessica Ramos. She had her hand out to us, and we contributed to her campaign,” Elias said. “She told me she wanted to donate the money to the border. I said, ‘Not a problem.’ She could do whatever she wanted with it.”

(A spokeswoman for Ramos said she never supported Elias’ project.)

Later that day Elias said he received a call from his lobbyist, former City Council Speaker Peter Vallone Sr., who told him that Moya had called and angrily declared that he was cutting off his support because Elias had spoken with Ramos, whom Moya had previously warned him not to discuss the project with.

“Moya told me, ‘I don’t get along with her, and if you communicate with her, all bets are off,’ ” Elias said. “But I’m not hiding from anyone. If she calls me, I’m going to speak to her. I’m not going to fall between two people who pretend to hate each other.”

“I don’t even know how to respond to that,” Moya said. “I have a good relationship with Jessica. People will say whatever they’re going to say.”

Moya offered a different description of his falling-out with Elias. He claimed that he had asked the developer to enter into a binding agreement with the city’s Department of Housing Preservation and Development that would have formally bound Elias to deliver the cut-rate units at deeper affordability levels. Elias never consummated the agreement with HPD.

“This is a guy who has been incapable of telling the truth,” Moya said. “It has nothing to do with progressive politics. When someone is being disingenuous, that’s not something that I’m going to tolerate.”

But some planning experts questioned Moya’s explanation, pointing out that he could have made the lower affordability levels a requirement of his approval for a portion of the apartments without the involvement of HPD.

Without Moya’s backing, the rezoning proposal never came to a vote in the City Council, and the project was scuttled.

In his conversation with Crain’s, Moya sought to distance himself from his initial support of the development. “This is a project I inherited from a predecessor,” he said, referring to former Councilwoman Julissa Ferrara.

Shortly after, Elias abandoned the residential component and pushed forward with a 2-story retail and office building spanning roughly 100,000 square feet, with the Target still in place, that could be built as-of-right under existing zoning rules.

That didn’t quell the project’s opponents, and a temporary stop-work order was issued in September by the city’s Department of Buildings at the behest of Queens Neighborhoods United. The opposition group, along with Ramos and other plaintiffs, then filed a lawsuit in state Supreme Court seeking to halt the project.

That suit was unsuccessful, as was a subsequent appeal to the state’s Appellate court. A separate appeal lodged with the city’s Board of Standards and Appeals was also rejected in June.

An attorney for the project’s opponents, Paula Segal, said she is planning to file another lawsuit in State Supreme Court challenging the BSA’s decision.

Target plans to open a roughly 23,000-square-foot urban concept store at the site, smaller than its normal big-box locations, but larger than the 10,000 square foot limit the property’s zoning places on any individual retail outlets located within it. The Target will skirt that rule by placing the bulk of its space in the property’s basement, floor area that is not counted under city zoning rules—a technicality that Segal said her forthcoming lawsuit plans to challenge.

Target and Elias have also described the location as a “variety store” rather than a department store, which is also prohibited by the site’s zoning. Segal said she plans to contest that designation as well in her upcoming suit.

Kaufman-Gutierrez insisted that the Target would drive local businesses under. She said a store near Elias’ project recently closed, with the proprietor reporting to her group that the landlord had raised the rent $3,000 a month because of Target’s pending arrival.

Meanwhile, the advocacy group conducted a street survey of what it says the community would like to see built on the site. The top four responses: a park, a senior housing complex, a 100% affordable apartment building or a community center for youth and worker programming.

Correction, July 9, 2019: The project’s opponents are filing a new lawsuit challenging the Board of Standards and Appeals decision. Their initial request for an injunction to stop the project failed when the Appellate Division ruled against them. These facts were misstated in the original version of this story.